It is also the only language, alongside English that is taught in every country in the world. French is considered the international language of arts, fashion and culture and thus, learning French gives you an insight into the most beautiful areas of human civilization. It is also a powerful language of business. Because of its widespread usage, it opens career opportunities in many areas of the world. Whether you are an entrepreneur or an ambitious career-driven person, learning French is a definite asset to your profile.

There are different diplomas and certifications to assess a person’s proficiency in the French language.

We, at Speakeng India provide complete French language training and prepare you for these diplomas and certifications. With us, you can be assured of being a certified French speaker.

The below diplomas are calibrated and named according to your progress in French learning.

Let’s have a detailed look at the diplomas:

Adding up DELF on your resume helps to highlight your proficiency in the French language for multiple purposes like work, personal or educational purpose.

DELF, in itself, has different forms targeted at a different audience. While DELF Prim is for kids of different age groups there is DELF Junior version and DELF for schools targeted at teenager audience. These levels are targeted more towards motivating beginners on their path towards French learning and are thus based on a positive evaluation process. There is another one for professionals, known as DELF Pro meant for students and professionals who wish to work or study in a French-speaking environment.

All of these are differently designed in their course structure and learning pedagogy keeping in mind the target audience and the end-use cases.

Diplôme Approfondi de Langue Française- This is also the official diploma in French language expertise awarded by the French Ministry of Education.

The DELF and DALF are both diplomas in the French level. The only difference being in the level of expertise. While DELF is targeted at basic learning for beginners and students, DALF assesses a more advanced level of French proficiency. It covers levels C1 and level C2, the highest levels. Acquisition of DALF is proof that one has obtained a master level of proficiency in the French language.

If you are in Bangalore and looking for an Institute to help you through these diplomas, your search ends at us. Speakeng India is the biggest training institute in Bangalore for French language and the corresponding diplomas i.e. DELF and DALF. We follow practical-based learning pedagogy that enables our students to better imbibe a foreign language in their skillset.

Start your journey towards learning French today with Speakeng India.

Speakengindia is the biggest training institute for French learning classes in Bangalore. Speakeng India offers the best French language classes in Marathahalli,  BTM layout, Madiwala,  koramangala and JP nagar. At Speakeng India we follow practical and activity based training which makes learning easier and interesting. Speakeng India has both Indian and French native speakers who are highly experienced in training.

Thank you. We will get in touch with you shortly.

Read More about our German Classes

A1:
During the Speakeng India French Language Course. The Language is spoken from the very first day of the course. As A1 is the introductory level of any language, after the completion of the A1 level at Speakeng India the student will be able to understand and use frequently-used expressions and simple phrases in order to articulate basic needs because speakenindia provides best French Language Training in Bangalore. The student will be able to introduce him/herself, ask for and offer basic personal information about his/her place of residence, his/her belongings, and about people, he/she knows. He/she will be able to interact in a basic manner as long as his/her interlocutor is willing to cooperate and speaks slowly and clearly.

A2:
A Speakeng India A2 level student will be able to understand frequently-used phrases and expressions related to relevant personal experiences (basic information on him/herself and his/her family, shopping, places of interest, activities etc.). The student will learn to communicate when carrying out simple, everyday tasks that don’t require more than the simple and direct exchange of information about familiar or habitual matters. He/she will learn to describe in simple aspects of his/her past and environment, as well as issues related to his/her basic needs.

B1:
At Speakeng India the B1 level being the intermediate level, a B1 level student will be able to understand the main points of clearly-written, standard Language, as long as the text is related to things familiar to him/her, such as work or school-related matters, or recreational activities. He/she will know how to interact in the majority of situations. He/she will be able to produce simple and coherent texts on familiar subjects or on those in which he/she has a particular interest. He/she will be able to describe experiences, events, desires and hopes, as well as briefly explain his/her opinions or plans.

B2:
Here the language gets interesting, We design the best French language Coaching Classes in Bangalore. After the Speakeng India B2 level, the student will be able to understand the main ideas of complex texts that deal with both concrete and abstract topics, including technical texts, as long as they’re related to the student’s area of expertise. He/she can interact with native speakers with a sufficient degree of fluency and spontaneity so that communication between both parties is effortless. He/she will be able to produce clear and detailed texts on a broad range of subjects, as well as defending his/her opinion on general-interest issues, indicating the pros and cons of different alternatives.
C1 : Advanced French for better communication
C2 : Advanced French for literature

More about the French language:

Why should I learn French?
There are numerous reasons that fall into this category and few are enlisted here to persuade you to learn French.

The French language Opens the door to international jobs
Having a profound knowledge of French can be beneficial and advantageous in terms of international jobs as the use of this language is there in various countries like Canada, Switzerland, Belgium and in the continents of Africa. Learning French can open the door of working in gigantic international companies as France has the fifth biggest economy and it is the third giant investor of the world.

French is a language of piercing heart

French has its own essence and the language is a perfect blend of art, culture, fashion, cooking and various interesting stuff. The precise knowledge of this language offers access to the immersing work of literature.

French is the best tour language-
France is a quintessential destination for the visitors and every year about 79.9 million people from the world visit here to feel its magnificent beauty. So, knowing the French language can be specifically remarkable as this will assist in communication and imbibing its expressively impressing beauty.

French is a significant language for higher education-
If you are planning for international universities and want to join the best B-schools, Science Schools or any other department, Then study of the French language can serve as a boon here because the people knowing the French language are given the extraordinary privilege.

So, telling the long story, in short, this is one of the easiest, funniest, lovable and acknowledgeable language that can help you in various ways. Learning French will always allow you to walk on the ladder of development and will also open numerous doors of opportunities. 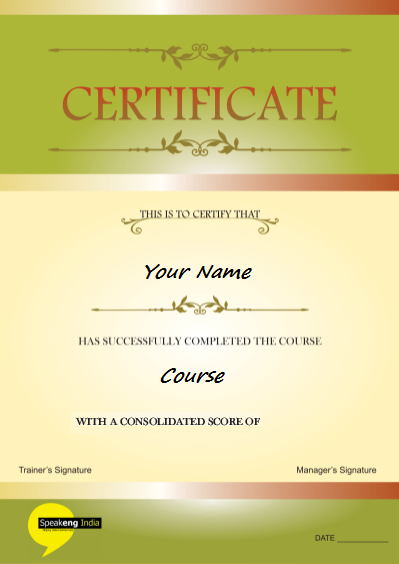 Upon Completing a French Language Course with Speakeng India, You will be presented with an esteemed Speakeng India Course completion Certificate.

“ I felt pleased after attending few classes led by Mr. Shreyas, Speakeng India, he has expertise in teaching and personal level involvement practice for each of his students. I am grateful to attend further class to fine-tune my English with his giddiness.”.

“ It was a really good experience to take part in intermediate course and the trainer’s knowledge is excellent especially mam I would like to thank for her . ”.

“ Speakeng India is a nice training institute. and I improve my English speaking skill thank you azma ma’am.Great support from faculties, individual attention and good atmosphere. I honestly suggest is Speakeng India. ”.

“ I have joined Speakeng India for German classes with Ashish sir and I find it very good. The classes are structured very well and sir explains everything with patience. We have online classes on zoom everyday and it has really helped me a lot to learn German. I would recommend Speakeng India to anyone wanting to learn German! ”.

“My overall band score is 7.5 in just 2 months of training in academic IELTS, I got 7.5 overall score. The team of SSC is highly skilled and co-operating; they guide students and help them in all their weak points. I recommend them to all who want to get good band score.”

” I got overall 6.5 bands in my IELTS exam this only because of elite school which trained me really well with all techniques and upgraded material of IELTS exam. I recommend everyone who is inspiring to gain good band score in IELTS to come and join this institute.”

“My name is wasim Abbas &I am 73rd batch student from Bangalore,This class helped to grow my confidence & Learn new things.”

“This is the best institute of imparting IELTS training and I am really thankful to the all mentors for helping me to achieve my desired score especially Uma Ma’am who has always been ready to help students.”

“This is first time I am reviewing anything on Google. Based on previously reviews, I opted for SPEAK-ENG-INDIA and it turns out to be absolutely true. I couldn’t ask for more. I believe Uma ma’am is one of the best IELTS instructor.”

“It was a magnificent experience at Speakeng India. I received a lot of confidence. It has notably expanded my grammar and vocabulary. Teachers are very kind and supportive. All credits goes to uma mam for improving my standard personality and communication skills.”

“Thanks to all your reviews. I went for a trial class and liked his coaching methods. Too friendly and cooperative. I feel 1 on 1 attention giving is a big plus. No complaints at all. Good Luck to future aspirants.”

“One of the best institutions that I’ve come across. I would really like to thanks Mariam Ma’am and whole institution for helping me out in improving my language skills. I got 7 bands overall with highest in listening – 8.5 Reading – 7 speaking – 7”

“The teaching method is really amazing. The teaching method is based on practical view which helps the students to clear their doubts with more easiness. Our Trainer Deepak sir teaches us in such a good way that we don’t even realize, we have been in class for a long time. Thanks a lot for lecturers.”

“Institute faculty….. your effort, level of detail that you focus on and corporate experience is unmatched. Ultimate is also a small word for you. The guidance in advanced vocabulary also helped a lot. Thank you for being patient enough”.